In dishonor of the Federal Reserve’s 100th birthday, which, we’re all sorry to say is today, Plum Borough/Pittsburgh libertarian and ace letter-writer Mark Crowley has penned  “Yes, Virginia, We need the Fed.”

In the spirit of the season, we at Steigerwald Post want to share Mr. Crowley’s work. We sincerely hope it offends the proper authorities.

And if Virginia O’Hanlon and Francis Church don’t like their work being abused for ideological purposes, they can write us a letter. 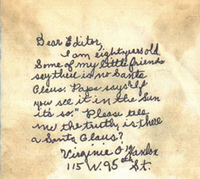 Yes, Virginia, We Need the Fed

I am 8 years old.  My parents say the Federal Reserve is bad and we don’t
need it.  Teacher says, “Email Fed Chair Bernanke and ask him.”  Please
tell me the truth; do we need the Fed?

Virginia, your parents are wrong. They have been affected by the
skepticism of liberty and individualism. They do not believe what
important central bankers like me tell them. They think their opinions and
beliefs are equal to those of the leaders and bureaucrats ruling them.
Mere common citizens have little minds.  In this great universe of ours a
citizen is a mere insect, an ant, in his intellect as compared with the
boundless intelligence of central bankers who grasp the whole of truth and
knowledge.

Yes, Virginia, we need the Fed.  The need exists as certainly as debt and
taxes and the IRS exist, and you know that they abound and impose on your
life necessary controls and limits. Alas! how dreary would be the world if
there were no Fed! It would be as dreary as if there were no Virginias.
There would be no childlike faith in authority then, no bailouts, no QE to
perpetuate this monetary existence. We would have no income tax, no
inflation. The eternal creation of currency which fills the world would be
extinguished.

Not need the Fed!  You might as well not need the Department of Education.
Your ancestors might have bought and sold goods and services with gold and
silver, but what does that prove?  Just because they did not have the Fed
is no proof that they did not need the Fed to protect them and provide
monetary order.  The most dangerous things in the world are those that
neither children nor parents can see, but central bankers and governments
do.   Did you ever see your parents earn too much income?  Of course not,
but that’s no proof that they do not.  Nobody can conceive or imagine all
the unseen dangers and inequities without intervention by the Fed.

You may tear apart a Federal Reserve Note and look for the truth inside,
but there is a veil of secrecy covering the unseen world which not your
parents, nor even all the united working people that ever lived could see.
Only the primary dealers, a few government officials and the Fed can push
aside that curtain to view and manage the supernal secrets and glory on
your behalf. Is it all real? Ah, Virginia, in all this world there is
nothing else real and abiding.